Interrupting the Myth: A Review of Elizabeth Catte’s “What You are Getting Wrong About Appalachia” 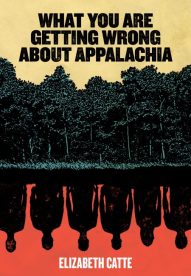 What You Are Getting Wrong About Appalachia by Elizabeth Catte

In What You are Getting Wrong About Appalachia, public historian Elizabeth Catte, who hails from Eastern Tennessee, is very angry and out to disprove pernicious misconceptions about the region she feels so tied to. When you are from a certain region, be it Appalachia or the Rust Belt, you know that there are an unlimited amount of perspectives and narratives that exist within that region. It can’t be reduced to some easily digestible narrative that reduces the multiplicity of stories and peoples into one homogenous bloc, a narrative that is typically consumed by urban cosmopolitans who exist in a “higher,” more enlightened realm than those who dwell in Appalachia or the Rust Belt. Catte is out to deconstruct these myths and common misconceptions that are used to define and explain Appalachia to cosmopolitan elites. It is a work of interrupting and deconstructing specific myths which are operative in our culture that tend to benefit certain people in power who aren’t from Appalachia at the expense of the people who are purported to be represented in these narratives and characterizations.

As Catte points out, there was a revived interest in Appalachia leading up to the 2016 election. Donald Trump was a monstrous figure to liberals and “Never Trump” conservatives alike. He violated generally accepted rules of decorum and civility, and appealed to the hopes and dreams of people from certain “forgotten” regions of the country that are typically glossed over. One is reminded of the infamous “flyover country” New Yorker cover: from the perspective of New York, the center of American culture, there isn’t much that exists outside of their own bubble when looking West, except for a few notable spots like Chicago and Los Angeles. While Appalachia isn’t on the cover of the magazine, it’s certainly one of the spots that would be glanced over. Or, to take it one step further, Appalachia wouldn’t merely be glossed over: it would be, according to Catte, highlighted as being “other” to America. It’s not even on the same level as the rest of flyover country.

In any case, a sudden interest in Appalachia from cosmopolitan, educated, and mostly elite liberals emerged leading up to the 2016 election. Trump just kept on gaining steam, and it didn’t make sense to liberals how somebody like Trump could possibly be gaining the support he was garnering. They needed to find and study these Trump supporters, who, whether from Appalachia or the Deep South, were certainly not visible to liberals in their day-to-day lives. The forgotten America needed to be remembered and put under a microscope if Trump was to be truly reckoned with.

Hence, the introduction of pieces chronicling, as Catte dubs it, “Trump Country,” which in many cases meant Appalachia. These articles popped up everywhere, from Vanity Fair to the New Yorker. The goal of the press in these pieces leading up to the election, as Catte describes in the introduction, was “to analyze what it presented as the extraordinary and singular pathologies of Appalachians, scolding audiences to get out of their bubbles and embrace empathy with the “forgotten America” before its residents elected Donald Trump.” After the election, commentators gave up on Appalachia, proclaiming that they could “reap what they had sown.” But the main problem with all of these pieces, to Catte, wasn’t necessarily that the attention given to Appalachia by the press was disingenuous, but rather that they deliberately portrayed Appalachia as a monolithic region of people sharing the same ethnicity and heritage with certain essential characteristics, which were presented as “other” to any characteristics someone from anywhere else in the country might have, in order to explain the region’s behavior. Appalachia became a scientific object of study, to be dissected and understood by educated elites, without any sort of concern for the people themselves. If they were to show empathy to Appalachians, it wasn’t about solidarity with people who, while not exactly the same as non-Appalachians, largely had similar problems in regard to economic exploitation and, yes, even identity politics (as Catte rightly points out, many of the problems that seem uniquely Appalachian are in fact shared universally throughout the rest of the country). Liberals showed empathy to the extent that they could perhaps keep Trump from getting elected by showing Trump Country residents that the Democrats, if they could just look at things from a rational rather than emotional point of view, were the ones who truly represented their interests.

Catte’s book comes as a response to this renewed national interest in Appalachia, and proclaims that there are two main objectives to her study. On the one hand, she aims to uncover who is benefitting from the popular narratives told about Appalachia while she is simultaneously poking holes in those narratives. On the other hand, she makes it a point to highlight and celebrate the people whose voices are almost universally omitted from the discourse surrounding Appalachia. She discusses people who have done noteworthy and heroic things who aren’t white, Scots-Irish, coal miners. There is actually a rich tradition of activism and community organizing in Appalachia that carries on into the present, and their concerns aren’t always related to coal. Further, as Catte reminds us over and over again, many of these people are Hispanic, African-American, and female. If J.D. Vance, the author of Hillbilly Elegy, is allowed to remake Appalachia in his own image for specific purposes, then so is Catte, who writes, “This (her) image of Appalachia does not deflect the problems of the region but simply recognizes the voices and actions of those who have struggled against them, often sacrificing their health, comfort, and even their lives.”

The book is divided up into three parts. Part one, “Appalachia and the Making of Trump Country,” is about the renewed interest in Appalachia leading up to and after the 2016 election. One of the most interesting points in the book is that if there actually was a genuine interest from the national public to learn about Appalachia, why is it that there was only one media narrative being produced and consumed? As Catte points out, “If it is appropriate to label a small but visible subgroup as unambiguously representative of 25 million people inhabiting a geographic region spanning over 700,000 square miles, then we should as a number of questions: Where were the “Bernie Country” pieces about Appalachia? There are more people in Appalachia who identify as African American than Scots-Irish, so where were the essays that dove into the complex negotiations of Appalachian-ness and blackness through the lens of the election?” The list goes on.

Part two, Hillbilly Elegy and the Racial Baggage of J.D. Vance’s ‘Greater Appalachia,’” discusses perhaps the most blatant example of misrepresenting Appalachia, a misrepresentation that directly contributes loads and loads of money to the pockets of the one doing the misrepresenting, namely Vance himself. Of course, Vance became famous due to the publication of his memoir Hillbilly Elegy, which was voraciously consumed by people outside of Appalachia as a way to understand the essence of Appalachian decay. The point Vance makes that Catte takes special exception to is his description of Appalachia being made up of a homogenous bloc of poor, white, Scots-Irish people, who, being part of the white working class, should be treated as a unique minority in their own right. The danger of Vance’s discourse is that we can brush off a discussion of race and identity politics at the expense of class politics. Part of Catte’s point is that we shouldn’t sacrifice one form of analysis for the other: they are both important. Furthermore, it is inherently problematic that Vance can be purported to represent an entire region in the national political discourse. As Catte quotes Vance as saying to the Washington Post, “It’s an indictment of our media culture that a group that includes tens of millions of people is effectively represented by one guy. I feel sort of uncomfortable being that guy.” But Catte rightly points out, he can’t be that uncomfortable being that guy, given how much he has personally benefitted from his status as a man both above and of Appalachia, able to translate their problems to cosmopolitan elites in order to make them easier to understand. To be honest, though, I don’t see Vance as being intentionally malicious or deceitful. Rather, it is, as Catte says, inherently problematic who gets to have the privilege of being an authority on a specific topic or region. Their views have a huge impact on public perception and indeed reality itself, and there are great benefits to be had for the one with this power.

Finally, part three, “Land, Justice, People,” tells the stories of, for the most part, present day activists and community organizers in Appalachia who both don’t fit in to the conventional stereotypes about Appalachians and who are rarely covered by the media. Catte discusses topics and people such as the Highlander School, a project by a local radio station to connect prisoners to their loved ones through “audio postcards,” the continued battle for Blair Mountain, and present-day organizers using tactics learned from their anti-coal predecessors to protest different things, like the prison-industrial complex. Through telling these stories, Catte makes the point that there are a ton of people and narratives in Appalachia that don’t conform to the traditional myths and narratives that are used to portray it, and these could be the bases for very different stories about Appalachia. This section is about solidarity, and directly counters the books and articles by figures like Vance.

What You Are Getting Wrong About Appalachia reminds us that the fight over representation has huge implications concerning power, both culturally and politically. It is impossible to paint a complete portrait of any portion of reality, whether it be a group of people or a region. But that doesn’t stop people from both doing so and making impactful decisions based on these portraits. This phenomenon is why a book like Catte’s is so essential. It is a very practical form of deconstruction that pokes holes in the operative myths and narratives that define Appalachia and determine how those in power make decisions concerning it. It has the power to make these conventional narratives less dangerous, and can potentially lead to the promotion of narratives that are less homogenous. This book is an act of resistance, both as a work of deconstruction and positive assertion of different narratives that get no coverage. On top of that, it is also an easily digestible but well researched cultural history and genealogy of how a region has come to be defined over time. It is very practical knowledge, and makes the larger, crucial point that we should be conscious of the myths and narratives that underlie our political and cultural discourse.

William Lennon is a writer based in Cleveland, Ohio, and the editor-in-chief of CRB.